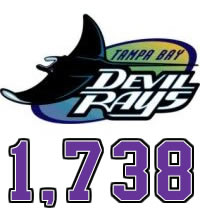 The Tampa Bay Rays, one of four franchises whose pitchers have never hurled a no-hitter, flirted with quitting the NoNoHitters club Friday Night.

Matt Garza took a no-no into the sixth inning and was poised to accomplish the feat until giving up a two-out single to the Texas Rangers’ Ian Kinsler.

So the Rays/Devil Rays franchise, established in 1998, remains in the exclusive club, with Tampa Bay’s count reaching 1,738 games. Other club members are (of course) the Mets, the San Diego Padres and the Colorado Rockies.

The Rays wound up winning 7-0 with Garza getting a two-hit, complete-game shutout.