No no-hitter for C.C., but he joins ex-Met Skip Lockwood 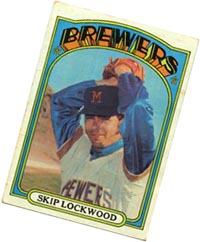 A Major League Baseball committee on Wednesday denied C.C. Sabathia a retroactive no-hitter, ruling that the game’s official scorer correctly flashed the “H” Sunday when the Brewers’ ace misplayed a soft infield grounder in the fifth inning of Milwaukee’s game against the Pittsburgh Pirates.

Who was the first Brewer to pitch a one-hitter? No other than Skip Lockwood, who pitched for the Mets from 1975 through 1979.

On May 30, 1972 at County Stadium, Lockwood shut down the New York Yankees, allowing only a sixth-inning RBI single by right fielder Rusty Torres that scored Yanks catcher Thurman Munson. Lockwood walked six during the game, which the Brewers won 3-1.

Lockwood never started a game for the Mets. He instead took on the role as closer, saving 65 games for the club during his career in New York. He posted his best season in 1976, saving 19 games with a 2.67 ERA.

Although Lockwood pitched his first Major League game with the Seattle Pilots (the eventual Brewers) in 1969, he actually broke into the Majors four years earlier as a position player. He appeared in 42 games in 1965 for the Kansas City Athletics, batting .121 in 33 at bats.