When did Topps become the Nostradmus Trading Card Co.? 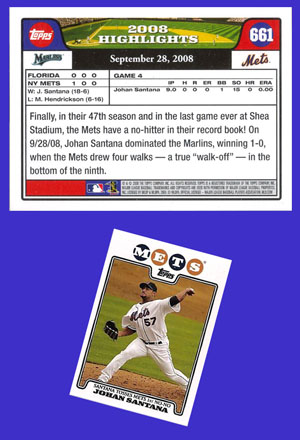 Fellow blogger Dave Mackey, who kicked off his Mets no-hitters count years before this site jumped into the fray, found an interesting blog entry about a 2008 Topps baseball card that suggests that the Mets will end their near 47-year no-hitter streak on Sunday.

According to bdj610’s Topps Baseball Card Blog, the Topps Trading Card Co. company short-printed a 671st card in its Series 2 set (which is supposed to end at 670) showing Johan Santana in action with the caption “SANTANA TOSSES METS 1st NO-NO.” 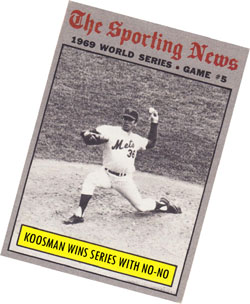 I’ve bought some Series 2 packs for my kids and have never stumbled upon this one, leading me to believe it’s either a very, very short print or some kind of a Photoshop hoax.

I did some cursory research and couldn’t find too much additional information about the Santana no-no card, so I decided to see if I, too, could use Photoshop to alter Mets history and end this drought back in 1969 and 1975. 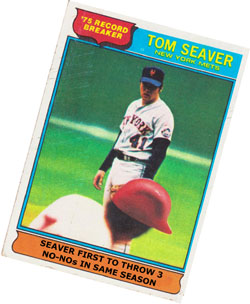 But, fun aside, I’m all for ending our no-hitter drought on Sunday, the final regular-season game at Shea Stadium. It would be a great way to say goodbye to the Mets’ old home.

But, if I had to choose between a final-game no-hitter and watching the Brewers and Phillies in the NLDS series or a final-game six-hitter that puts the Mets into the postseason, clearly I’d choose the latter.

2 Responses to When did Topps become the Nostradmus Trading Card Co.?