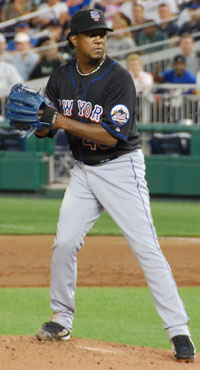 Pedro Martinez says he’d like to come back to the Mets. Looking up and down the Spring Training roster, I don’t see anyone more qualified to take the club’s fifth starter position.

Well they’ve all submitted resumes, but no one’s been real impressive in interviews. It’s time for an outside candidate.

The 37-year-old Martinez, speaking to the New York Daily News, said he’s not going to chase the Mets, but he would like to rejoin the club.

Sure, the Dominican Republic lost to the Netherlands 3-2 in the World Baseball Classic, but Martinez threw four scoreless innings, striking out four with a fastball that’s reaching into the 90s. What do the Mets have to lose?

We’re holding out hope – Pedro still has a spot in our NoNoHitters.com “Who will throw the first Mets no-hitter?” poll.

This entry was posted in Spring training and tagged pedro martinez. Bookmark the permalink.