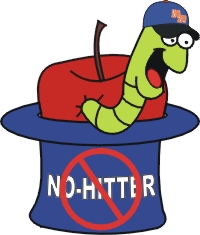 So with this year’s debut of Citi Field, we felt it was time to introduce our own character. Helping us enter our 48th season of futility in no-hitters is Nono, the new NoNoHitters.com mascot.

NoNo is a peaceful fella and he doesn’t mean to cause harm. He doesn’t rot the apple, but his mere presence can occasionally hang a curve ball, nudge a ground ball toward a hole between two infielders or push a warning track fly ball over the home run fence. And no, he’s not responsible for 7,482 games without a no-hitter. He’s maybe played a part in 50 or 60 of those, including the three Tom Seaver lost in the ninth inning (see Jimmy Qualls in ’69, Leron Lee in ’72 and Joe Wallis in ’75).

By the way, according to the
Mascot Hall of Fame (yes, there is such a thing) Mr. Met is believed to be the “first mascot in Major League Baseball to exist in human (as opposed to artistically rendered) form.”

Well as far as we know, NoNo has just become the first mascot for a Web site dedicated to tracking a team’s futility’s in no-hitters. That means if similar Web sites ever pop up for the San Diego Padres, Tampa Bay Rays or Colorado Rockies, Nono will be a lock for charter membership in the No-Hitter Web Site Mascot Hall of Fame.