Gooden chats about his (non-Met) no-no 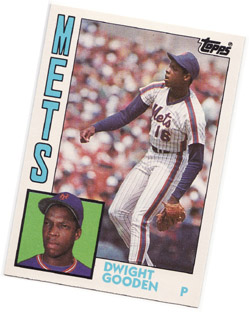 MLB Network last night aired a great interview with Dwight Gooden, a distinguished member of our No-hitters thrown after they left the Mets club.

The extended in-studio interview with Matt Vasgersian and Harold Reynolds, which was recorded last month, re-aired because of the Mets’ signing of Gooden’s nephew, Gary Sheffield.

Gooden, who pitched for the Mets from 1984 to 1994, covered a variety of topics during the interview, including his early days with the Mets, his drug problems, his time in prison and the lessons he learned from the experiences.

He also talked about throwing his no-hitter, which he of course hurled as a New York Yankee – not a Met – in the latter days of the career.

The day before the May 14, 1996 accomplishment, Gooden found out that his father was going to have open-heart surgery. Yankees Manager Joe Torre gave Gooden permission to go home instead of pitch, but Gooden told MLB Network that he decided his father would want him to pitch.

The surgery was a success and so was the game, as the scoreboard showed a zero in the Seattle Mariners’ “H” column during the Yanks 2-0 victory. Gooden flew home the next day and was able to give his dad the game ball.

Gooden, a key member of the 1986 World Championship club, had one of the best seasons ever for a Mets pitcher in 1985 when he went 24-4 with a league-leading 1.53 ERA. The closest he came to a no-no as a Met was on Sept. 7, 1984, when a fifth-inning single by Keith Moreland marked the Chicago Cubs only hit during a Mets 10-0 win.