A Citi-taxpayer compromise: The T.A.R.P. tarp

Remember all that off-season controversy regarding whether the Mets’ ballpark should be named after a company that took taxpayer bailout money? Here’s a compromise: The T.A.R.P. tarp. 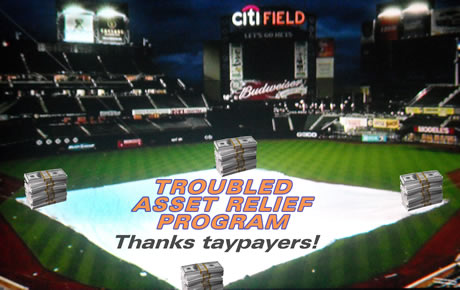 Although baseball is thankfully now the focus of the Mets’ new home, it wasn’t too long ago that two congressmen were trying to get the U.S. Treasury to force Citi to pull out of its naming rights deal with the Mets.

Well Citi was able to retain its ballpark naming rights, so why not give taxpayers a bone? That way every time it rains, we can think of our 401ks coming down in buckets.