Another cycle? This is supposed to be a RARE feat! 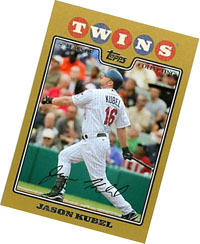 The Minnesota Twins’ Jason Kubel hit for cycle Friday night, making us update our “No-hitter vs. hit for cycle” page for the third time this season.

Since baseball began, an average of 2.14 players per season have accomplished the feat, defined as hitting a single, double, triple and homer in the same game. Now, barely three weeks into the young 2009 season, we’ve already guaranteed we’ll top that average. Amazing!

Our focus is no-hitters (or the Mets’ lack thereof), but hits for cycle hold a special place in our hearts because they’re nearly as rare as no-hitters. An average of 1.79 pitchers have thrown no-hitters, although that number was much closer to the cycle average before the powers that be knocked 50 no-hitters off the record books by tightening the definition.

The Twins’ Kubel capped off his cycle in a dramatic fashion. After doubling in the first, singling in the third and tripling in the sixth, he stepped up to the plate with the bases loaded and his team down 9-7. His grand-slam blast completed the cycle and gave the Twins an 11-9 win.

Kubel becomes the ninth Twin to hit for the cycle, tying another team that seems to have no problem hitting for cycle but 47 years of problems accomplishing a no-hitter. Anyone …. anyone?

The Twins franchise (including their time as the Washington Senators) has six members of its no-hitters club: Walter Johnson, Bobby Burke, Jack Kralick, Dean Chance, Scott Erickson and Eric Milton.

Our favorite is Chance, as he’s the only one to also have a spot on our No-hitters … before they came to the Mets page.

This entry was posted in General and tagged hits for cycle. Bookmark the permalink.