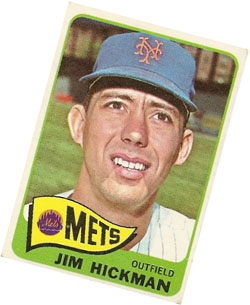 Forty-six years ago today, on Aug. 7, 1963, Jim Hickman became the first New York Met to hit for the cycle, accomplishing a feat nearly as rare as a no-hitter.

Hickman’s accomplishment at the Polo Grounds is considered a natural cycle, because he hit his single, double, triple and home run in that order during the Mets 7-3 win over the St. Louis Cardinals – a rare victory during a 51-111 season.

Hickman led off the game with a single, doubled in the second, tripled home Mets picher Tracy Stallard in the fourth and led off the sixth with a solo home run. He got a chance to make it a 5-for-5 day in the eighth but flied out to left.

So to summarize, the Mets own 0 of the 240 sanctioned Major League no-hitters, yet 9 of the 287 hits for cycle in Major League history. So in Mets history, the no-hitter is MUCH more rare than the cycle.

For the record, only three teams (the San Diego Padres, the Tampa Bay Rays and the Florida Marlins) have never had a player hit for cycle. The Padres and the Rays are the only franchises void of a no-hitter or cycle, while the Colorado Rockies have had a cycle but no no-hitter.