Here is the second installment of our periodic feature on the Mets’ 33 one-hitters. 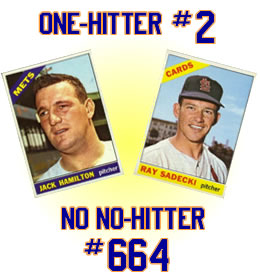 This Web site wouldn’t exist if it wasn’t for Cardinals’ southpaw Ray Sadecki, a one-time 20-game winner who would later join the Mets and help them win the National League pennant in 1973.

Mets’ starter Jack Hamilton had retired the first eight Cardinals batters on May 4, 1966, when Sadecki stepped up to the plate. Sadecki, looking to spark a two-out rally after spotting New York a 5-0 lead, reached base on a bunt single for what would be the game’s only hit. (The Mets franchise’s 664th no no-hitter.)

Hamilton followed by issuing Lou Brock a base on balls before striking out Alex Johnson. He would retire the next 18 Cardinals batters for the 8-0, complete-game shutout, thanks to big days at the plate by Eddie Bressoud (3-for-5, home run, 3 RBIs) and Ron Swoboda (2-for-4, home run and a double, 2 RBIs).

Hamilton had actually piched a minor-league no-hitter in 1957, throwing a seven-inning no-no for the Appalachian League Wytheville Cardinals.