Here is the third installment of our periodic feature on the Mets’ 33 one-hitters. 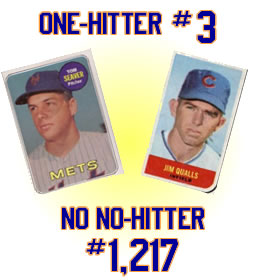 With Hall-of-Famer Billy Williams, near Hall-of-Famer Ron Santo and Hall-of-Famer Ernie Banks at the heart of the Chicago Cubs’ lineup, you wouldn’t think a rookie utility player named Jimmy Qualls would be the lone Cub to stand between Tom Seaver and a perfect game.

Qualls was 0-for-2 when he stepped to the plate in the ninth inning after Seaver retired the first 25 batters, and he would be the one to keep the 59,000 fans that packed Shea Stadium that night from witnessing history.

“A clean hit to left-center-field, and there goes the perfect game,” a matter-of-fact Ralph Kiner declared on-air.

The crowd gave Tom Terrific a standing ovation as Seaver put his hands on his hips and stared from the mound at the spot where the ball touched green.

“I’m glad I got the hit and everything, but it would have been a really big thing for him,” Qualls told Politi. “I don’t think I understood that at the time.”

Seaver would reach the ninth three more times with a no-hitter intact – two with the Mets and one with the Reds. Only the Reds game would end with a zero in the "H" column, cementing Seaver’s place on our No-hitters … after they left the Mets page.