Here is the fourth installment of our periodic feature on the Mets’ 33 one-hitters. 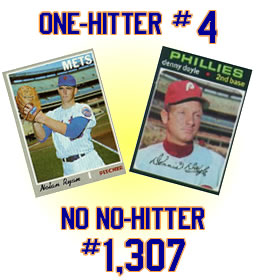 Two future Hall-of-Famers took the Shea Stadium mound on April 18, 1970, and each has established his own place in Mets’ no no-hitters history.

Nolan Ryan went on to become the king of our No-hitters … after they left the Mets page, throwing all of his Major League record seven no-hitters in other uniforms.

Ryan had no real chance of throwing the first Mets no-hitter this day, as the Phillies’ Denny Doyle tagged him for a leadoff single to boost the franchise’s no no-nos count to 1,307 games. Ryan nearly lost his shutout in the first inning after loading the bases with a couple of walks, but he pitched out of the jam.

Ryan would go on to walk six batters during the game, but he also struck out 15 batters and never yielded another hit.