Here is the seventh installment of our periodic feature on the Mets’ 33 one-hitters. 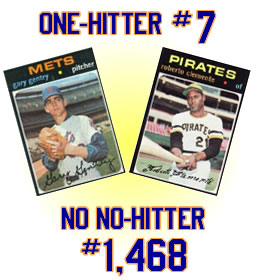 Gary Gentry gave up two sixth-inning runs during his second one-hitter, but he actually got into trouble an inning earlier.

Pitching in the fifth after retiring the first 13 batters he faced, Gentry walked Al Oliver, hit Bob Robertson with a pitch and watched the two runners advance into scoring position on a Manny Sanguillen ground-out. But after Gentry intentionally walked Jackie Hernandez to face pitcher Luke Walker, he ended the inning on a strikout.

In the sixth, Gentry got Dave Cash to pop out before walking Richie Hebner, but he lost both his no-hitter and shutout on a Roberto Clemente triple to center. Willie Stargell scored Clemente with a sacrifice fly to left, but Gentry settled down to retire the next 10 batters for the complete-game, one hit victory.

Cleon Jones led the Mets’ offense by going 2-for-3 with a two-run homer and 3 RBIs, and Tommie Agee (2-for-4) added a solo shot in the eighth.