Here is the tenth installment of our periodic feature on the Mets’ 33 one-hitters. 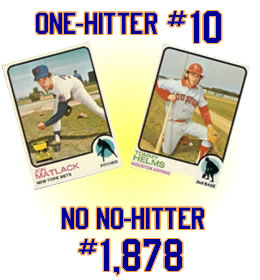 Mets’ southpaw Jon Matlack, who won one game in the ’73 National League Championship Series and started three games (1-2) in the World Series, retired the first 15 batters he faced at Shea this night, and the crowd of nearly 20,000 might have started thinking that it could be the night that the Mets would break the curse.

But Tommy Helms led off the sixth inning with a double, and the Mets’ dubious streak added one more game to reach 1,878. Matlack allowed two more baserunners – both walks – but Duffy Dyer threw out Jim Wynn on a steal attempt and the Mets sent Doug Rader to the bench on a double-play, so Matlack faced just 28 batters – one more than the minimum for a complete game.

Dyer scored the game’s only run with a third-inning single up the middle to score Rusty Staub.