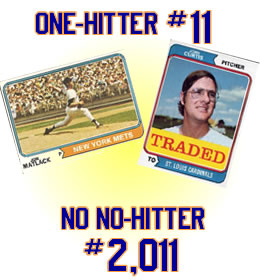 It was Old-Timers Day in Flushing Meadows, but it was the young southpaw Jon Matlack who stole the show this day for the Shea Stadium crowd of more than 37,000. Matlack, getting the start against the St. Louis Cardinals’ John Curtis, had already walked a couple of batters when Curtis (a .159 hitter that year) stepped up to the plate in the third inning and hit a one-out single to left, breaking up the 2,011th potential Mets’ no-hitter.

Matlack walked one more batter en route to a 4-0 win over the first-place Cards, although the defending National League champion Mets improved to just 30-42 – 8 games back in the N.L. East standings.