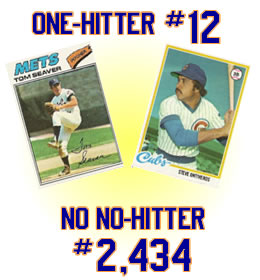 Baseball was the last thing on New York City residents’ minds the Sunday that Tom Seaver got his fifth and final one-hitter as a New York Met.

Early in the morning of April 17, 1977, an unknown killer shot 18-year-old Valentina Suriani and her 20-year-old boyfriend, Alexander Esau in the Pelham Bay neighborhood of the Bronx, leaving a handwritten letter nearby signed “Son of Sam.” David Berkowitz would later be identified and arrested on Aug. 10, 1977.

The Yankees played in Milwaukee that day, but baseball went on in Queens as Seaver kept a no-no intact into the fifth inning. Steve Ontiveros, who had walked in the second inning, stepped up with one out and hit a soft liner that right-fielder Ed Kranepool played on one hop, advancing the Mets’ streak without a no-hitter to 2,434 games.

Fifty-nine days later, the Mets would deal Seaver to the Cincinnati Reds for Pat Zachry, Doug Flynn, Steve Henderson and Dan Norman, and another year and a day after that, Seaver would finally got his elusive no-hitter as a Cincinnati Red.