The NoNoHitters.com count goes dormant at 7,806 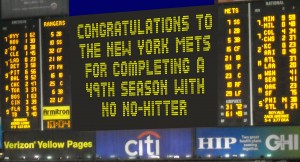 NoNoHitters.com gives an old-school congratulations to the New York Mets for their efforts.

Season 49 had a couple of one-hitters, thanks to Jonathon Niese and R.A. Dickey, but the dubious streak was apparently meant to continue despite the no-hitter taking center stage this year.

Two teams, the Colorado Rockies and the Tampa Bay Rays, exited the no no-no club, leaving just the Mets (circa 1962) and the San Diego Padres (circa 1969) as charter members.