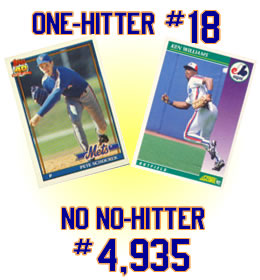 With the 2011 season quickly approaching, we’re getting back to our occasional series chronicling the Mets’ 35 one-hitters.

We last talked about No. 17, David Cone’s Aug. 29, 1988 one-hitter against the San Diego Padres, which was broken up by a fourth-inning Tony Gwynn double. That brings us up to 1991, a year that saw three Mets one-hitters, all in the span of 10 days. (As always, you can see the full list of Mets’ one-hitters here.)

Pete Schourek was a top Mets’ starting pitching prospect, but injuries forced him into a relief role for the start of the 1991 season. He made his Mets debut on April 9, pitching 1 1/3 innings of scoreless ball in relief of Frank Viola.

On Sept. 10 of that year, Schourek had a perfect game through 5 2/3, after getting Tim Wallach to fly out to center and Larry Walker to line out to right field. But he lost the perfecto by issuing a two-out base-on-balls to Andres Galarraga, then lost the no-no when Ken Williams singled to center.

He escaped the fifth-inning jam by getting Gil Reyes fly out to center, then let another runner reach scoring position in the sixth by walking Delino DeShields and following it with a wild pitch. But Schourek retired the next 10 batters to record the Mets’ 19th one-hitter.

Schourek struck out seven batters while Howard Johnson and Mickey Sasser provided the offense, with Johnson knocking in three runs and falling just a triple short of the cycle, and Sasser going 3-for-5 with a home run.

In 1995 as a Cincinnati Red, Schourek had an 18-7 season in which he finished second for the National League Cy Young award, but he never reached that level again.