On this day 45 years ago, Seaver signs with Braves 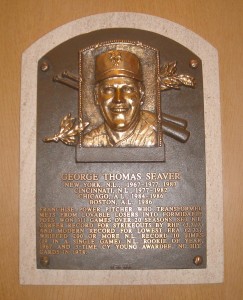 On this day 45 years ago – Feb. 24, 1966 – Tom Seaver signed a $40,000 contract with the Atlanta Braves. Six days later, Baseball Commissioner William Eckert ruled the contract was void because the University of Southern California’s baseball season was still going.

Eckert then allowed other teams to match the Braves’ offer and get a chance at him in a lottery, and the Mets beat out the Braves, Philadelphia Phillies and Cleveland Indians to sign Seaver.