Tails from the Script yield flashbacks to ’93 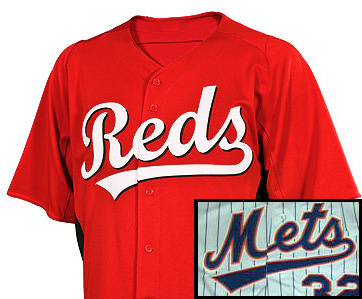 The new Reds’ batting practice jerseys worn during this game have a frighteningly similar look to the horrible Mets’ home jerseys introduced in 1993. Like many Mets fans you’ve likely blocked this from your memory, but the traditional Mets script sported a tail during the 1993 and 1994 seasons, as did the script New York on the road uniforms.

Thankfully, the old-style script returns by 1995.