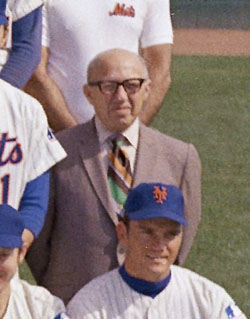 Today we are recognizing the 50th anniversary of the New York Mets’ first game by honoring the first front-office employee hired by the franchise. No, it’s not Casey Stengel, Ralph Kiner or Ed Kranepool … it’s Lou Niss.

Longtime Mets fans who religiously bought the team yearbook each season will remember Niss as the older gentleman donning eyeglasses and a business suit in team photos amid the pinstripe-wearing Metropolitans. What I didn’t know about Niss, the Mets’ traveling secretary for 19 years, was that he’s a former Brooklyn Eagle sports editor who spent his newspaper career working for dailies in the borough.

According to the Bill Shannon Biographical Dictionary of New York Sports, found on the New York Historical Society Museum and Library site, Niss was born in 1903 in Minsk, Russia, and began his newspaper career in 1923 with the Brooklyn Times. A series of mergers eventually reduced Brooklyn’s four dailies to zero, but in 1941, Niss became the Eagle sports editor.

“When the Eagle folded in 1955 during a strike, Niss did publicity for Yonkers Raceway for three years (1955-58) and then joined Branch Rickey’s projected third major league, the Continental League,” according to the Biographical Dictionary article. “When the league forced expansion in the A.L. and N.L., Niss was hired by the Mets, initially as a publicist.”

But Niss in 1962 became the Mets’ traveling secretary, a position described by former Met outfielder Art Shamsky as “the person taking the blame for just about everything.” Shamsky, in his book “The Magnificent Seasons,” said Niss took the wrath of players on the ’69 squad upset about being stranded in a Montreal airport just before the All-Star break.

“The perfect traveling secretary is a person who can handle the pressure, doesn’t care and is a little little hard of hearing,” Shamsky wrote. “Lou Niss fit all those criteria.”

Niss was making sure his players were at ease right from the start.

During his first spring training in St. Petersburg, Fla., Niss walked up to rookies Al Jackson and Choo-Choo Coleman, who according to independent columnist Milton Gross were the first former Negro League players to be living and eating at the same hotel as their white teammates at a permanent training facility in Florida.

Jackson and Coleman decided to go for a walk instead of hanging out in the lobby of the swank beachfront Colonial Inn. Niss, wanting to make sure they knew they were welcome, told them “we’re all here together.”

“If anything bothers you, tell me,” Niss told them. “That’s my job. I’m getting paid to see that all the players are comfortable.”

Niss spent 19 seasons with the club before retiring. He died in 1987.