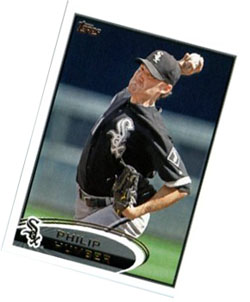 The Chicago White Sox’ Philip Humber, the Mets’ first-round draft in 2004, has thrown a perfect game against the Seattle Mariners.

Humber made his first Major League start in September 2007 against the Washington Nationals. He was traded to the Minnesota Twins in the Johan Santana deal, but his next Major League start wasn’t until August 2010 as a Kansas City Royal. His no-no came as a perfect game Saturday during the Sox’ 4-0 win at Safeco Field.

And 27 consecutive outs almost weren’t enough. Humber won the game on a strikeout of pinch hitter Brendan Ryan, but it required a 2-3 putout to put the game in the books. Humber’s low-and-outside pitch got away from catcher A.J. Pierzynski, and Ryan paused to argue the call with home plate umpirer Paul Runge before running to first base. Pierzynski threw the ball to first and Humber had his perfecto.

With the accomplishment, Humber becomes the seventh ex-Met to join our No-hitters … after they left the Mets page, and only the second ex-Met to throw a perfect game. David Cone, as a New York Yankee, threw his perfecto on July 18, 1999 on Yogi Berra Day at the old Yankee Stadium.

Perhaps it was the mojo that day from Don Larsen – the only pitcher to ever throw a World Series perfect game – throwing out the game’s ceremonial first pitch that led Cone to perfection. His retiring of the minimum 27 Montreal Expos batters was interrupted by a half-hour rain delay after the third inning, but Cone kept sending Expos back to the dugout for the Yankees’ second perfect game in as many years. Final score was Yankees 6, Expos 0.