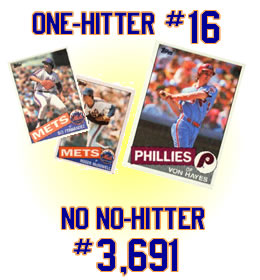 This game was significant for another reason. Mets’ slugger Darryl Stawberry injured his thumb while trying to make a shoe-top catch and wound up spending six weeks on the DL. The team had started the season 18-8 with Strawberry in the lineup, but posted a 20-23 record during his absence.