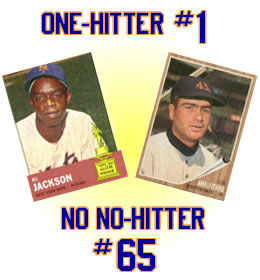 The expansion New York Mets had a 2-12 record when lefty Al Jackson pitched the club’s first shutout – an April 29, 1962, 8-0 win over the Philadelphia Phillies. The Mets’ second shutout, also with Jackson on the mound, would also be the franchise’s first one-hitter.

Jackson retired the game’s first batter but let Joey Amalfitano reach base on a single to left for the Mets’ 65th no no-hitter. After walking Norm Larker, Jackson retired the next 22 batters before issuing a ninth-inning leadoff base-on-balls to pinch-hitter Pidge Browne. Jackson closed out the ninth with three straight outs for the complete-game shutout.

Jackson had a little help in the field during the game, according to an AP report from that day. Richie Ashburn made a leaping catch at the right field fence in the fifth to rob Jim Pendelton of a hit, and shortstop Elio Chacon made a backhand grab behind second, flipped the ball to second baseman Charlie Neal who made the throw to first to get Hal Smith.