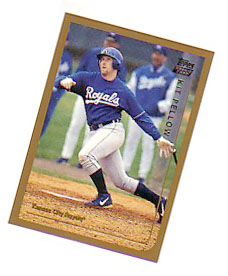 On May 23, 2004, the Mets’ Tom Glavine had a no-no in tact heading into the eighth inning, and fans at Shea were growing increasingly excited and tense as they now stood for every at-bat.

After Glavine got the Colorado Rockies’ Jeromy Burnitz to fly out to left and struck out Matt Holliday, up to the plate stepped Kit Pellow, a 30-year-old Kansas City native who broke into the Majors in 2002 with the Royals. Pellow took a pitch in the dirt, then drove a 1-0 changeup over Shane Spencer’s head to the right-field wall for a double.

The Mets’ no-hitter drought would continue.

Last I heard, Pellow was playing some pretty good ball in the Mexican League, but I haven’t heard an update in a few years.

One Response to Glavine falls 4 outs shy of Mets no-hitter, 9 years ago today