An All-Star Game no-hitter? Not likely, but there has been a two-hitter 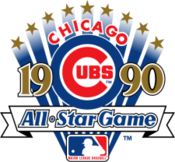 2 Responses to An All-Star Game no-hitter? Not likely, but there has been a two-hitter