Happy 39th anniversary to the Amazins’ of ’69 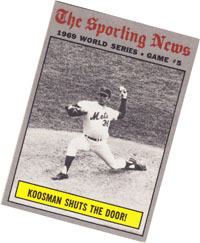 On Oct. 16, 1969 – 39 years ago today – the Baltimore Orioles’ Davey Johnson hit a fly ball to left field caught by the Mets’ Cleon Jones, setting off a Shea Stadium celebration that wouldn’t be duplicated for 27 years (when Johnson was manager of the Mets).

Jerry Koosman went the distance to lead the Mets to a 5-3 win, fueled by homers by Donn Clendenon and Al Weis and eighth-inning doubles by Jones and Ron Swoboda. A fine memory for any Mets fan, even one that was just one year old at the time.

So I continue rooting for the Amazin’ Rays, who can clinch a World Series trip tonight with a win over the Boston Red Sox. And for the record, I’m not a bandwagon-rider as the Rays are my American League team. I lived in Tampa for 17 years and was there for the club’s inaugural season and the subsequent string of losing seasons.