Ellis, who pitched a trippy no-hitter before joining the Mets, dies 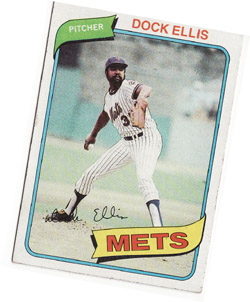 Dock Ellis, one of nine pitchers to hurl no-hitters before joining the New York Mets, died Friday at the age of 63.

Ellis has acknowledged taking LSD the day of the game as he was under the impression that the Pirates had a day off. Turns out he was scheduled to pitch Game 1 of a doubleheader. (See this Dallas Observer article for details of this infamous feat.) The 2-0 win apparently wasn’t pretty, as Ellis walked eight and hit at least one batter.