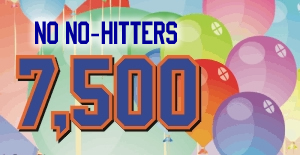 The New York Mets’ unprecendented no no-hitters streak reached its 7,500th game today when Oliver Perez gave up a first-inning single to the Washington Nationals’ Ronnie Belliard. So rather than talk about about Game 7,500 (which was rather pathetic), we’ll look back at some of the other Mets’ no no-hitters milestones beginning with Game 1 back in 1962 and culminating with today’s 8-1 loss to the Nationals. As always, a huge thumbs-up to Retrosheet for running such an incredible baseball statistics site that allows for such research.

April 11, 1962, Busch Stadium, St. Louis
The St. Louis Cardinals’ Julian Javier singles to left off Mets starter Roger Craig for the first New York Mets game without a no-hitter. Few at the time probably recognized the significance of this moment, focusing instead on the franchise playing its first-ever game. But then few probably realized that we’d be talking about the stat 7,499 games later.

Friday, June 8, 1962, second game of doubleheader at Wrigley Field, Chicago
Cuno Barragan singled to right off Mets’ starter Bob L. Miller for the 50th New York Mets game without a no-hitter. The Cubs broke a 1-1 tie and took the lead in the seventh inning on a single by Ron Santo, and Chicago held on for a 3-2 win in an eight-inning game called due to darkness. The Mets had won the double-header opener 4-3.

Saturday, July 28, 1962, Busch Stadium, St. Louis
The St. Louis Cardinals’ Charlie James hits a second-inning single off Jay Hook for the 100th New York Mets game without a no-hitter. The Mets rack up 16 hits during the 9-8 win, led by a 4-for-5 Richie Ashburn and a 3-for-6 Rod Kanehl. Gene Woodling contributes off the bench with a two-run pinch-hit homer in the fifth inning.

Tuesday, April 27, 1965, Astrodome, Houston
The Houston Astros’ Joe Morgan leads off the game with a single to right off the Mets’ Jack Fisher to make it 500 New York Mets games without a no-hitter. Mets’ shortstop Roy McMillan hits a second-inning RBI single to put the Mets up 2-0, a lead that would hold until the ninth inning when Eddie Kasko hit a two-run walkoff double off Dennis Ribant. Astros 3, Mets 2.

Sunday, May 12, 1968, first game of doubleheader at Wrigley Field, Chicago
The Chicago Cubs’ Billy Williams hits a first-inning single to right off Don Cardwell to make it 1,000 New York Mets games without a no-hitter. The game heads into the bottom of the ninth tied at 3, but Glenn Beckert hits a walk-off single off Cardwell to score Don Kessinger and hand the Mets a 4-3 loss. (New York would wake up for the nightcap, crushing the Cubs for 17 hits while Dick Selma hurled a complete-game 10-0 shutout.)

Thursday, June 21, 1973 at Three Rivers Stadium, Pittsburgh
Gene Clines, who would later join the Mets for the 1975 season, leads off the game with a single to center off Jerry Koosman to make it 2,000 New York Mets games without a no-hitter. The Mets lost 2-1 in a game that feature just one RBI. It remained scoreless for six innings until the Pirates took a 1-0 lead on a Manny Sanguillen double. Jim Beauchamp tied the game in the eighth by scoring on a Felix Millan double-play, but the Bucs got the eventual winning run when Dave Cash scored on a Bob Robertson double-play.

Friday, July 1, 1977 first game of doubleheader at Olympic Stadium, Montreal
The Montreal Expos’ Ellis Valentine hits a first-inning double to left off Jon Matlack to make it 2,500 New York Mets games without a no-hitter. The Mets, down 6-1 in the eighth inning, rally for four runs on back-to-back doubles by Joel Youngblood and Len Randle, an RBI single by Steve Henderson and a two-RBI single by Mike Vail. But they failed to get the tying run and lost 6-5. (The Mets also lost the nightcap, 5-3.)

Friday, July 18, 1980, second game of a double-header at Riverfront Stadium, Cincinnati
The Mets’ Mark Bomback gives up a leadoff single to the Cincinnati Reds’ Dave Collins to make it 3,000 New York Mets games without a no-hitter. A 3-for-4 day by leadoff hitter Lee Mazilli was wasted by a 1-for-19 performance by the 2-through-6 hitters in the order. Reds 8, Mets 3, completing the double-header sweep.

Sunday, April 19, 1987, Busch Stadium, St. Louis
The St. Louis Cardinals’ Jack Clark leads off the second inning with a double off Sid Fernandez to make it 4,000 New York Mets games without a no-hitter. El Sid would escape the inning unscathed, but he gave up three runs in the third as the Cards went on to win 4-2. The Mets’ only runs came from Keith Hernandez, who doubled in Len Dykstra and Mookie Wilson in the seventh.

Wednesday, August 28, 1991 at Atlanta-Fulton County Stadium, Atlanta
Brian Hunter hits a second-inning single to left off Frank Viola to make it 4,761 New York Mets games without a no-hitter. Why does that number matter? The square root of 4,761 is 69, which is the year of the first Mets World Series. The Braves won 3-1 on a four-hitter by Tom Glavine, who would join the Mets’ pitching staff in 2003.

Monday, May 24, 1993, Veterans Stadium, Philadelphia
The Philadelphia Phillies’ Pete Incaviglia hits a solo homer off Frank Tanana to make it 5,000 New York Mets games without a no-hitter. Incaviglia would tag Tanana for another homer, and Dave Hollins blasted a two-run shot during the Mets’ 6-3 loss.
Phillies’ starter Tommy Greene pitches a complete game to improve his record to 6-0 during a season that would bring the N.L. Pennant to Philly.

Sunday, May 16, 1999, Veterans Stadium, Philadelphia
The Philadelphia Phillies’ Doug Glanville led off the game with a single to left off Mets’ starter Oral Hershiser to make it 6,000 New York Mets’ games without a no-hitter. Hershiser would hold the Phils scoreless until a four-run, sixth-inning rally that featured a two-RBI triple by Rob Ducey. Roger Cedeno and John Olerud got the only RBIs for the Mets during the 5-2 loss.

Friday, April 7, 2006 at Shea Stadium, New York
The Florida Marlins’ Hanley Ramirez led off the game with a single to center off Steve Trachsel to make it 7,000 New York Mets games without a no-hitter. Trachsel would give up just two more hits in his six innings of work, Jose Reyes and David Wright each homered as the Mets beat the Fish 9-3.

Tuesday, June 24, 2008 at Shea Stadium, New York
The Seattle Mariners’ Jose Lopez singles to center off Oliver Perez to make it 7,386 New York Mets games without a no-hitter. The number 7,386 might not seem like a milestone, but it’s the perfect square of 86 (in other words 86 x 86 = 7,396), and clearly ’86 was the luckiest year in team history. That prompted me on May 30, 2008 make the bold prediction that the Mets no hitters curse would be broken in the team’s 7,396th game. So what happened? The Mets lost 11-0 and I promised to refrain from any further predictions.

Sunday, April 27, 2009, at Citi Field, New York
The Washington Nationals’ Ronnie Belliard hits a first-inning single off Mets’ starter Oliver Perez to make it 7,500 New York Mets games without a no-hitter. Not too much to say about this 8-1 loss, as Perez gave up seven earned runs on nine hits and three walks in 4 1/3 innings of work. The Mets’ only run came in the first when Carlos Delgado tripled home Carlos Beltran.

Information used here was obtained free of charge from and is copyrighted by Retrosheet. Interested parties may contact Retrosheet at www.retrosheet.org.