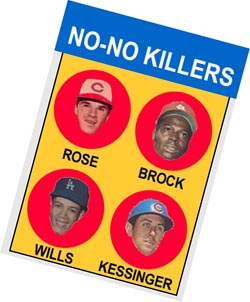 If there were a Hall of Fame for breaking up Mets no-hitters early and often, Charlie Hustle would be a first-ballot inductee. You can bet on it.

Pete Rose leads all Major Leaguers by breaking up 55 potential Mets’ no-nos from the leadoff position, according to our latest research venture, far ahead of silver medalist Lou Brock with 34 and Maury Wills, who takes the bronze with 33. Don Kessinger has 31, but Juan Pierre could move up the ranks by adding to his count of 30.

This is just one of the new fun facts you’ll find on our expanded No-hitters killed by first at bat page.

Looking at our all-time pitching staff, Mets’ aces Jerry Koosman and Tom Seaver are tied for the lead among Mets’ pitchers who’ve lost the most no-hitters on the first batter, each with 78. Dwight Gooden (62), Ron Darling (60) and Bobby Jones (52) round out the Top 5.

Mike Pelfrey holds the lead among our current roster with 21 early exits from no-no contention, followed by Oliver Perez and John Maine with 15 each (Their disabled list stints in 2009 probably kept them from adding more to their counts). Johan Santana is fourth with 11 and the recently cut Livan Hernandez had 9.

The archrival Philadelphia Phillies have accomplished this feat more than any other franchise, with 191 leadoff Mets no-no break ups since 1962. That’s 39 more than the Pittsburgh Pirates (152) and 42 more than the St. Louis Cardinals (149). The Atlanta/Milwaukee Braves (146) and the San Francisco Giants round out the Top 5, but the Chicago Cubs and Washington Nationals/Montreal Expos are nipping at the Giants’ heels with 142 each.