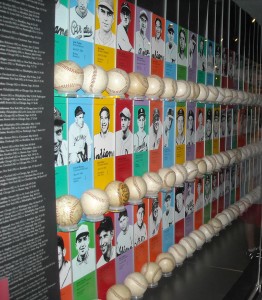 When Mark Buehrle threw his perfect game on July 23, 2009, it was the third time the Chicago White Sox hurler had faced the minimum 27 batters for a complete game.

He got plenty of attention on April 18, 2007, when he no-hit the Texas Rangers (Buehrle had picked off Sammy Sosa from first after the designated hitter drew a fifth inning walk).

Buehrle was perfect through 6 1/3 until Omar Vizquel singled with one out in the seventh. But Vizquel was sent back to the dugout when Matt Lawton grounded into an inning-ending double play.

The next inning, pinch-hitter Tim Laker led off with a single, but Casey Blake doubled him up. Buehrle completed the effort, throwing just 90 pitches (67 for strikes).

I was curious about the rarity of these 27-batter non-no-no games, so I did some research on the fabulous Baseball-Reference.com Play Index. Turns out that since 1954, there has been 31 games in which a starter threw a complete game, faced the minimum 27 batters yet gave up at least one hit. Fifteen were one-hitters, 10 were two-hitters and five were three-hitters.

Only John Candalaria (a very brief member of the 1987 Mets) has accomplished this rare feat while yielding four hits. It happened on July 25, 1982, with Candalaria’s Pittsburgh Pirates facing the Atlanta Braves at Three Rivers Stadium.

Candalaria lost his no-hitter in the first inning on a one-out Rafael Ramirez single, but catcher Steve Nicosia threw him out on a steal attempt.

Glenn Hubbard got the game’s fourth hit in the ninth with a leadoff infield single, but Bruce Benedict cleared the bases with a 6-4-3.

Just one of these was thrown against the Mets – Woody Fryman, July 1, 1966, Pittsburgh Pirates 12, Mets 0. This one is particularly interesting because Ron Hunt led off the bottom of the first with a single but was caught stealing second by Jim Pagliaroni. Fryman then retired the next 26 batters for the complete-game shutout.

If it’s any consolation, the Yankees had this done to them twice.

On May 12, 1967, the Orioles’ Jim Palmer was working a perfect game through six, but Horace Clarke singled to center to lead off the seventh. Tom Tresh hit into a 4-6-3 double-play, and Palmer completed the game for a one-hit 14-0 shutout.