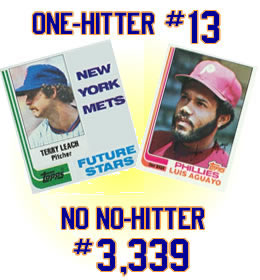 Terry Leach retired the first seven batters on Oct. 1, 1982, before giving up a pair of walks to shortstop Ivan De Jesus and pitcher John Denny, but he got out of the inning with his no-hitter intact by getting to Garry Maddox fly out to left and Pete Rose to ground into a force-out.

Leach held onto the no-hitter until one out in the fifth when Luis Aguayo hit a triple, but Leach worked his way out of the inning with the shutout still going.

Denny, too, made it through nine innings with a one-hitter alive, with Mets’ slugger Dave Kingman getting the lone Mets’ hit by leading off the second inning with a single to right.

The Mets scored the game’s lone run in the top of the tenth off reliever Porfi Altamirano, who walked Kingman and gave up a Gary Rajsich single that advanced pinch-runner Rusty Tillman to third. Hubie Brooks scored Tillman on a sacrifice fly, and Leach closed out the 10th for the one-hit shutout.