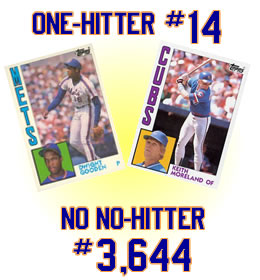 Rookie sensation Dwight “Doc” Gooden walked leadoff batter Bob Dernier to start this game and Dernier immediately moved into scoring position by stealing second, but Gooden settled down to strike out Ryan Sandberg and Gary Matthews and then got Leon Durham to ground out to end the inning.

Gooden kept the bases empty until the fifth inning when Keith Moreland stepped up to the plate and killed Gooden’s no-hitter with a slow roller to third ruled an infield hit by the official scorer. I’ll leave the pictures, descriptions and accounts of that hit to a couple of NoNoHitters.com readers who where at Shea that night.

From Steve: “You should know that Keith Moreland’s hit against Dwight Gooden in September 1984 – I was there – was an absolutely positively *&%$#$ %*$&!#% ERROR by Ray Knight on a slow roller toward third base. Knight gloved it, double clutched and could have rolled it to first and beaten the Kranepool-esque Moreland and gotten him. Knight never threw, I never forgave him or the official scorer, who was a total and complete brainless nitwit (G rated) to score it a hit. For confirmation, you can ask Rick Sutcliffe, who has said on the air a number of times that it should have been a no-hitter.”

Another view from NoNoHitters.com reader Mark: “I too was at that game, and I too yelled and screamed at Knight for not having the common sense and decency to at least throw the ball away in an attempt to draw an error on that play, since it was obvious that Gooden was unhittable that night. Still, even I acknowledge that had to be scored a hit, whatever Rick Sutcliffe might say.”

Gooden did prove unhittable that night (save Moreland’s squibbler), striking out 11 Cubs while walking four for the Mets’ 14th franchise one-hitter.

It would be 12 years later – in the Bronx, not Queens – that Gooden would finally get a no-no during the Yankees’ May 14, 1996 2-0 victory over the Seattle Mariners.