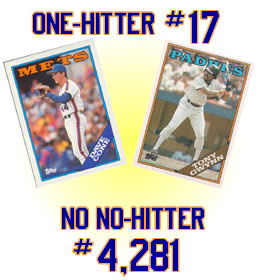 David Cone, who went 20-3 with a 2.22 ERA in 1988, was obtained from the Kansas City Royals a year earlier in a rather lopside trade (the Mets gave up backup catcher Ed Hearn, Rick Anderson and Mauro Gozzo). Cone was hardly alone in pitching a one-hitter in 1988, with 22 thrown during the season (Toronto’s Dave Steib threw two), the most since 1979.

And the San Diego Padres’ Tony Gwynn was responsible for the lone hit in two of 1988’s one-hitters.

On June 6 of that year, Gwynn stepped up to the plate against Tom Browning of the Cincinnati Reds with one out in the ninth and killed his no-no effort.

A runner had reached third in the second inning on a walk and two errors, but Cone got Tim Flannery to line to third to end the inning, then retired the next four batters before Gwynn’s double. Cone allowed just a sixth-inning walk en route to the Mets’ 17th one-hitter in history.

He would get his first no-hitter, a perfect game, as a New York Yankee in 1999.