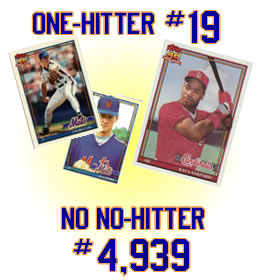 The Mets’ 19th one-hitter came just four days after No. 18, but 19 marked a first for the franchise – it was the first time Mets’ pitchers threw a one-hitter and lost the game.

David Cone got the the start, and he held on to a no-hitter through four innings before getting into a jam in the fifth. He issued a lead-off walk to Milt Thompson, let him steal second, walked Geronimo Pena and then let both runners reach scoring position on a wild pitch.

Cone gained his composure to strike out Rich Gedman and pitcher Omar Olivares, but Ray Lankford tagged him for a singled to center to make it 2-0 Cardinals. That one hit would kill Cone’s no-hitter, shutout and earn him his 13th loss of the season.

Cone did away with the Cardinals in the sixth and seventh innings and reliever Jeff Innis took care of the eighth after Cone was lifted for a pinch hitter, but the Mets couldn’t notch just one unearned run in the ninth, falling a run short.