Where was Dr. Joyce Brothers in MLB Network’s Costas-Michaels pairing? 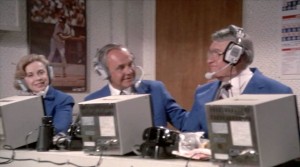 Mets fans used to hearing their games called by Gary, Keith and Ron were thrown for a loop mid-game Friday night when longtime broadcasters Al Michales and Bob Costas jumped over to SNY from the MLB Network for a while.

The MLB Network broadcast was a reunion of sorts, as Costas and Michaels hadn’t called a baseball together since the 1995 World Series.

But did the pairing of the two mark the most star-studded broadcast booth of all time?

That honor was achieved during a 1988 fictional match-up between the California Angels and the Seattle Mariners during the Leslie Nielsen police comedy, “The Naked Gun.”