No-hitters … before they joined the Mets 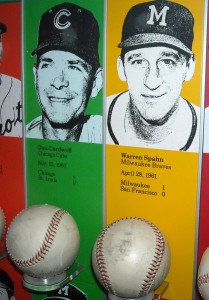 Cardwell's and Spahn's no-no balls at the Hall.

Don Cardwell, may have been in the latter part of his career when he joined the New York Mets in 1967, but he played a key part in guiding them to a World Series title in 1969. Cardwell, with the Mets from 1967 to 1970, had started the ’69 season 3-9, but he won his next five games down the stretch to help the Mets overtake the Chicago Cubs for the National League East crown.

Nine years before that, while pitching for the Chicago Cubs, Cardwell pitched a no-hitter against the St. Louis Cardinals. Cardwell died Jan. 14, 2008 at the age of 72.

Hall of Famer Warren Spahn won 363 games during his Major League career, most with the Boston/Milwaukee Braves. Unfortunately when he came to the Mets in 1965 as a pitcher and pitching coach, he didn’t have much gas left in the tank. Spahn, 44 in 1965, appeared in 20 games for the Mets, going 4-12 with a 4.36 ERA. After the team released Spahn in July, the San Francisco Giants picked him up and he finished out the last year of his career there.

Although the record books won’t admit it, Dean Chance’s no-hitter on Aug. 25, 1967 was actually his second that month! Just 19 days earlier, Chance yielded no hits while pitching the Twins to a rain-shortened 2-0 win against the Boston Red Sox.

Major League Baseball statiticians don’t recognize anything less than 9 innings, so Chance is only credited his no-no against the Indians, which came during Game 2 of a twi-night doubleheader. Oddly enough, he actually gave up a first-inning run in the game. Chance walked the first two batters he faced and a Caser Tovar error loaded the bases. Chance then threw a wild pitch, allowing Lee Maye to score.

What’s unique about Dock Ellis’ 1970 Pittsburgh Pirates no-hitter against the San Diego Padres? How about that it was likely the only hitless game thrown by a player tripping on acid.

That’s right, the urban legend is apparently true. Ellis has acknowledged taking LSD the day of the game as he was under the impression that the Pirates had a day off. Turns out he was scheduled to pitch Game 1 of a doubleheader. (See this Dallas Observer article for details of this infamous feat.) The win apparently wasn’t pretty, as Ellis walked eight and hit at least one batter.

John Candelaria, a 20-game winner in 1977, wasn’t in New York very long, pitching just three games for the Mets in 1987 for a 2-0 record and 5.84 ERA. The Mets picked him up from the Angels in mid-September of that year, giving up Jeff Richardson and Shane Young. Candelaria was eligible for free agency at the end of the season and signed with the Yankees for 1988 season.

Candelaria’s no-hitter came in 1976, when the Pittsburgh Pirates beat the Los Angeles Dodgers 2-0. Candelaria struck out 7 and walked just one batter, though two other Dodgers reached base on errors.

Another intersting tidbit about Candalaria is that he holds the modern Major League record for most hits given up – four – while facing the minimum 27 batters in a game, Pirates vs. Braves – July 25, 1982.

Here’s how it went down: Candalaria lost his no-hitter in the first inning on a one-out Rafael Ramirez single, but catcher Steve Nicosia threw him out on a steal attempt. Bob Horner led off the second inning with a single to right, but Rufino Linares grounded into a 6-3 double-play. Horner also led off the eighth with a single to right, but this time Linares grounded into a 4-6-3 double-play. Glenn Hubbard got the game’s fourth hit in the ninth with a leadoff infield single, but Bruce Benedict cleared the bases with a 6-4-3.

According to Baseball Digest, Royals outfielder Kirk Gibson got a late jump on a Dan Pasqua line drive in the fifth inning. Gibson made a last-ditch-effort jump at the warning track but the ball tipped off his glove, letting Pasqua reach second. The official scorer initially ruled it a hit but changed it to a two-base error after watching replays. Saberhagen had his no-no.

During the off-season, the Mets snagged Saberhagen from the Royals for outfielder Kevin McReynolds and infielders Greg Jeffries and Keith Miller (the Mets also got infielder Bill Pecota). Unforunately, Saberhagen’s tenure with the Mets from 1992 through 1995 was plagued with injures. His best season with the club was in 1994, when he went 14-4 with a 2.74 ERA

Scott Erickson, who made two starts with the Mets in 2004, threw a no-hitter as a Minnesota Twins starter a little more than ten years earlier.

Erickson began the April 27, 1994, contest against the Milwaukee Brewers with an ERA of 7.48, but the right-hander became the first Twins hurler in more than 27 years to toss a no-no with a 6-0 win at the Metrodome. The previous Twins’ no-no was by another eventual Met, Dean Chance.

Erickson walked four, hit a batter and threw a wild pitch during the game, letting runners reach second in the eighth and ninth innings before pitching out of the jams. His five-strikeout performance marked the franchise’s third no-hitter.

The Mets picked up the oft-injured Erickson in 2004, keeping him in their minor league system for a half year before bringing him up to the parent club for a couple of late July starts (he gave up 9 runs on 15 hits and four walks in eight innings of work). The Mets dealt him to the Texas Rangers on July 31 for a player-to-be-named-later (Josh Hoffpauir).

Kenny Rogers is one of a select few major leaguers ever to throw a perfect game. But his 1994 gem against the California Angels is not how he’ll be remembered by most Mets fans.

Most of us will remember Rogers walking Andruw Jones with the bases loaded in the bottom of the 11th of Game 6 of the 1999 National League Championship Series, thus ending our quest for a third World Series title. To be fair, John Franco blew it the eighth and Armando Benitez screwed up in the 10th, so to pin everything on Rogers would be akin to Red Sox fans blaming everything on Bill Buckner when Calvin Shiraldi and Bob Stanley really set up their 1986 collapse. (Couldn’t resist bringing up that memory!)

Al Leiter was a solid pitcher for the New York Mets from 1998 through 2004, having his best statistical season in 1998 with 17 wins, 6 losses and a 2.47 ERA. It was two years earlier that Leiter got his no-hitter with the Florida Marlins during an 11-0 route of the Colorado Rockies in Miami.

In 1999, Leiter was instrumental in getting the Mets into the playoffs, pitching a 2-hit complete game shutout in a winner-take-all one-game playoff against the Cincinnati Reds for the NL’s wild card slot. How did the rest of the playoffs go? See the Kenny Rogers item above.

Hideo Nomo, who pitched for the New York Mets in 1998, holds the distinction of being the only player to pitch no-hitters both before and after his time with the Mets. He wasn’t with the Mets long, pitching just 17 games during the 1998 season and posting a 4-5 record and 4.82 ERA. Nomo’s other no-no was on April 4, 2001, when the Boston Red Sox beat the Baltimore Orioles 3-0 in Baltimore.

4 Responses to No-hitters … before they joined the Mets